The Most Traded Currency Pairs in Forex ({{current-year}})

More than 50% of trades in Forex market somehow involve the US dollar.

In fact, EURUSD is the most traded currency pair in the world that takes about 30% of the total multi-billion dollar Forex turnover. And it is not surprising, since the economies of the US and the European Union are the largest ones.

Traders prefer such currency pairs because their liquidity and thereby trading conditions are better than that of other pairs.

Probably, everyone would keep trading EURUSD only, if there was no need for diversification.

That is why traders also use other currency pairs. Moreover, their trading volume correlates with the size of the economy in corresponding countries.

So, the British pound, the Japanese yen, the Swiss franc, the Australian, and the Canadian dollars will make up the most actively traded currency pairs together with the US dollar and the Euro.
[ads slot=”ssi-in-article”]

What are the Most Actively Traded Currency Pairs in Forex?

The most traded pairs broken down by categories:

The full list of top traded currency pairs, as well as their approximate trading volume, is available in the following table:

Interestingly, USD/DEM was the most widely traded currency pair before the Euro was introduced. The Deutsche Mark was the second-largest reserve currency in the world at the time, which attracted traders’ interest.

What Does Popularity of Currency Pair Affect?

First of all, actively traded pairs have high liquidity. Since more people are interested in an asset, the easier it is to buy and to sell.

Thus, the EURUSD pair will commonly have the best trading conditions:

Here we should also mention clearer candlestick chart formation (without gaps). It significantly influences the accuracy of the readings of all indicator kinds.

In addition to the trading conditions, the popularity of a currency pair also affects its informational visibility:

It is often argued that the top traded pairs are also the most predictable ones. However, this fact is not supported and is based mainly on guesses.
[ads slot=”ssi-in-article”]

The Most Traded Pairs by Region 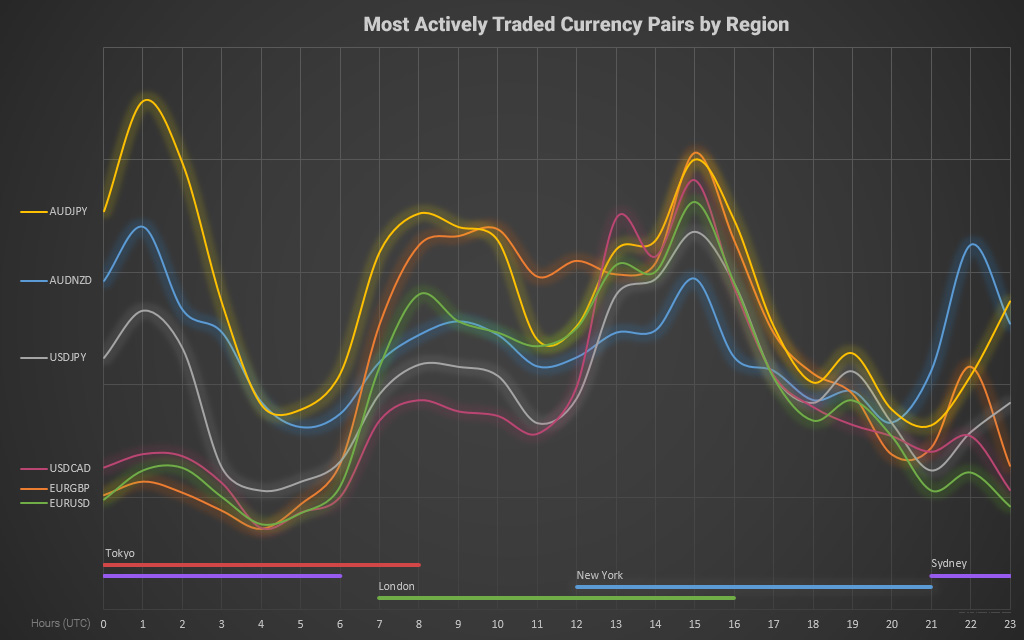 The chart shows the currency pairs activity depending on the time of the day. The pairs were selected in such a way as to visually demonstrate the influence of a region on the “tradability” of a pair.

What’s interesting about the chart?

We have listed the most traded currency pairs, but can we identify the least traded ones?

Each list has its first and last number. However, things aren’t that simple when it comes to currency pairs.

To date, there are about 180 different currency names in the world. So, the number of possible currency pair combinations is 16,110.

Hypothetically, we can assume that the SZL/VUV (the Eswatini Lilangeni/the Vanuatu Vatu) pair may be the world’s least traded one. We can also say the same for hundreds of other extremely exotic pairs. However, it’s not possible to determine exactly which one is traded the least.

If we limit the list only to Forex pairs (available in the trading terminal), the least traded ones will be the following:

These pairs have shown the minimum trading volume at the time of this writing.

The popularity of a currency pair provides the best trading conditions. Therefore, to start, you better use such pairs.

When choosing a currency pair, make sure to analyze its intraday activity. Some of them are traded only at a specific time of the day.

The trading volume of a currency pair is not a constant value. The numbers and values given in the article were gathered during the writing and may change over time.

description: What are the most commonly traded currency pairs in the world? List of 20 the most heavily traded Forex pairs by volume in {{current-year}}. How does the popularity of a currency pair affect trading results? Also, find out which currency pairs are the least traded.

Hi! I`m an authtor of this blog. Read our post - be in trend!

Innovative Solutions to Your Projects